The Most Advanced PLR Ever Created...  Sep 1st

The Most Advanced, High-Quality PLR Ever Made

"His funnels have insanely high conversion rates, and he is one of our Top 1% affiliates..."

"...almost inconceivable that this is PLR.  This will change everything..."

"Super impressed with the quality of his PLR"

Get Your Affiliate Link
Message Me on FB

"Steven knows a thing or two about beating the odds..."

"Performed great for me, especially considering I've got a software list"  (he never promotes PLR)

"If you want to drastically increase your profits... it is absolutely crucial that you work with Steven Alvey...."

EMAIL SWIPES
Get Your Affiliate Link

"...almost inconceivable that this is PLR... the elegance, the production value. This will change everything..."

"Brilliant! Viking PLR sets a new standard for PLR quality. Frankly, it’s hard to believe this is PLR at all..."

"I am super impressed with the quality of his PLR... Steven has raised the  bar"

"it's a great deal... I see tremendous value in what he's done."

"When it comes to private label rights we have high standards...  we were thoroughly impressed..."

"It really is the best-looking and highest quality PLR I've ever  seen in 18 years of internet marketing."

"...setting a new standard for private label material.  ...they have put together something incredible!"

Click Here for the latest updated funnel and oto breakdown.

WHAT OUR JVs SAY 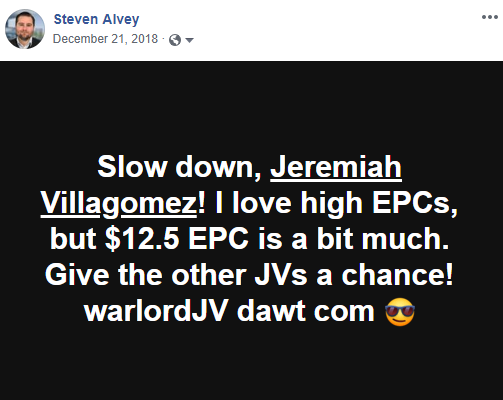 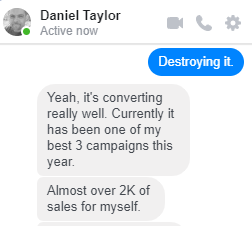 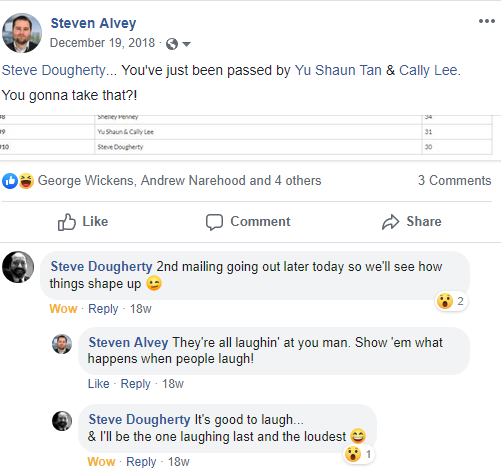 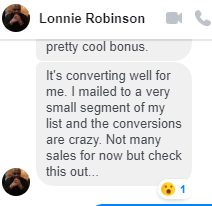 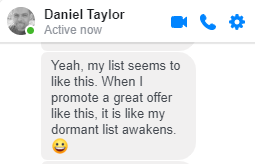 WANT TO SEE THEIR EPCs from my past PLR launches? 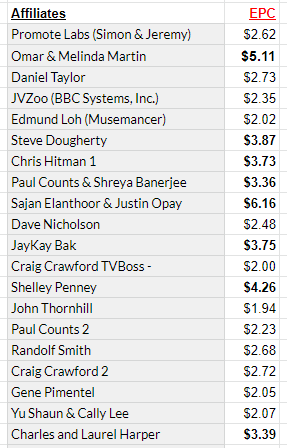 These are our Top 20 Affiliates

Notice a trend there?

With ONE exception, everyone had at least $2 EPC....

When is the last time you saw that in a launch?

Average EPC for the Top 20:

These are just SOME of the legendary JVs who have trusted and promoted my products.

Will you be the next Warlord JV? 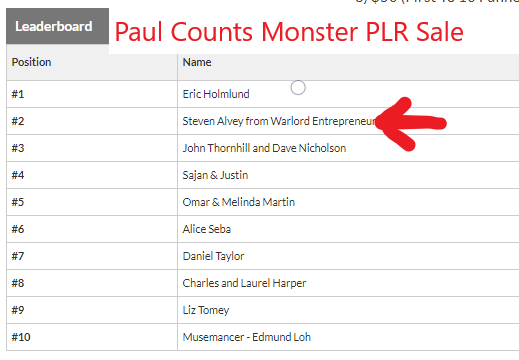 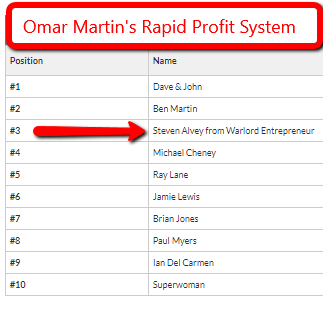 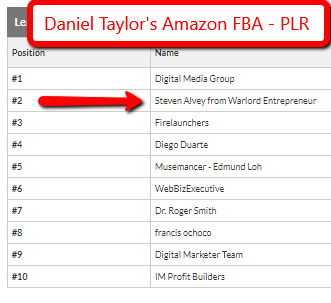 "Steven Alvey brought some serious heat and did over $8K in sales for our EverLesson launch."

The Top Grossing Launch on JVZoo from 26-31 Dec,

We finished just below two of the biggest names in the industry... 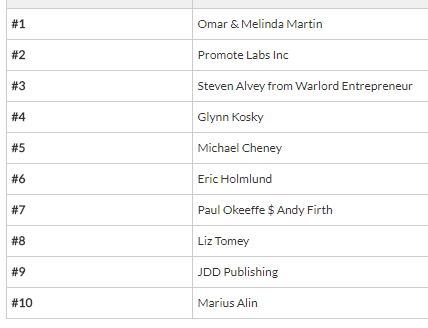 Don't ask me if I reciprocate...

Omar Martin on me beating Mike Filsaime and breaking the all time EPC record for his flagship product:

"I'll be honest, I mean, that was absolutely unbelievable..."

[about one of our promos]

Paul Counts and Shreya Bannerjee on me DOMINATING their leaderboard for their blockbuster Monster PLR Firesale Launch:

Full disclosure: Although I was #1 for the ENTIRE launch, even beating John Thornhill, Dave Nicholson, Omar Martin and others... the Usurper Eric Holmlund knocked me down to #2 in literally the last 12 hours or so before closing.

John Thornhill & Randy Smith discussing my epic 3rd place finish behind 20-year industry legends PromoteLabs (on the Top Grossing launch on JVZoo) back when my list was only 1,500 strong! 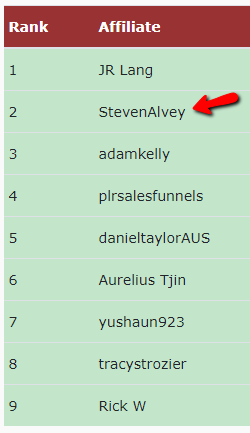 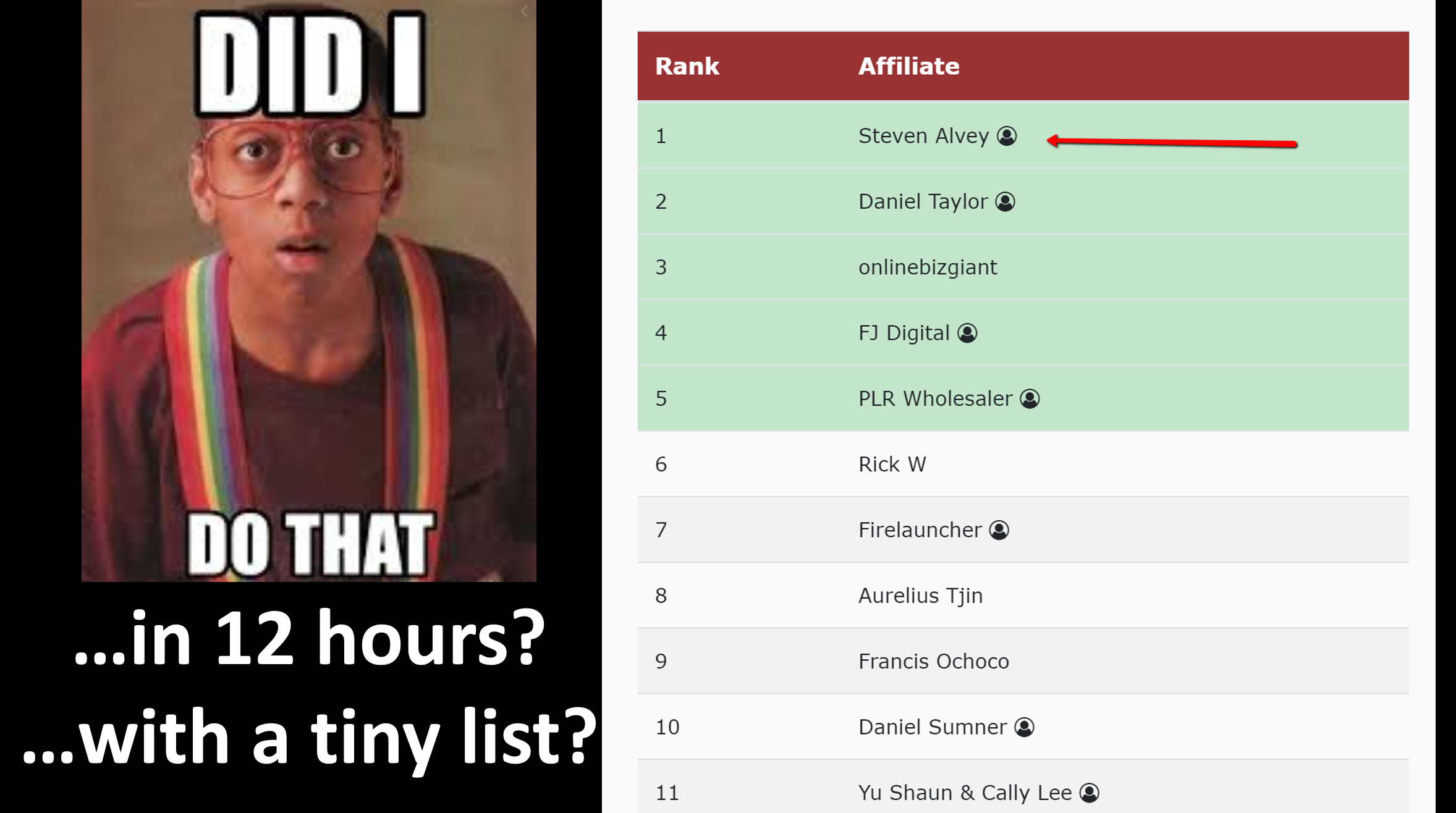 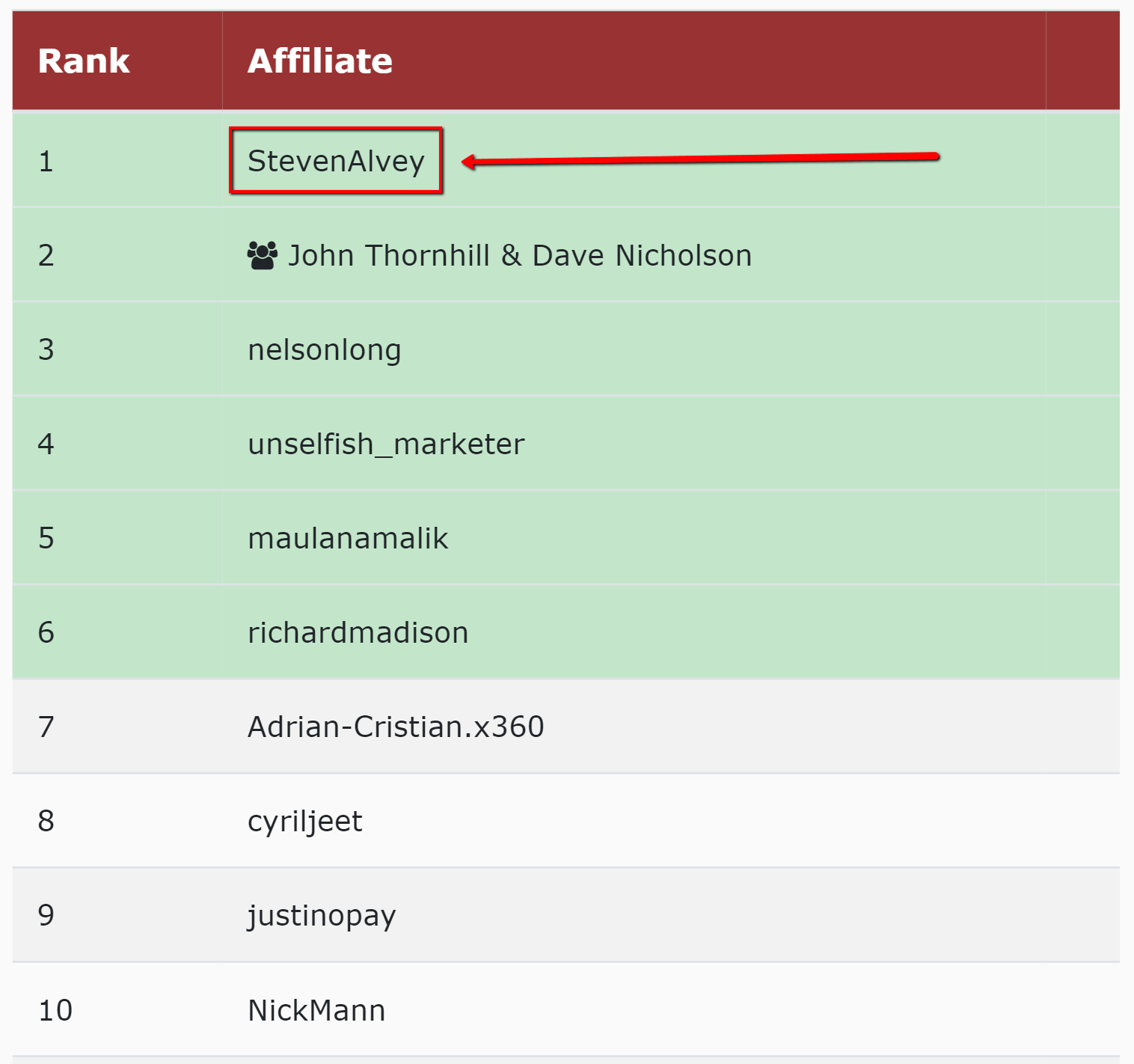 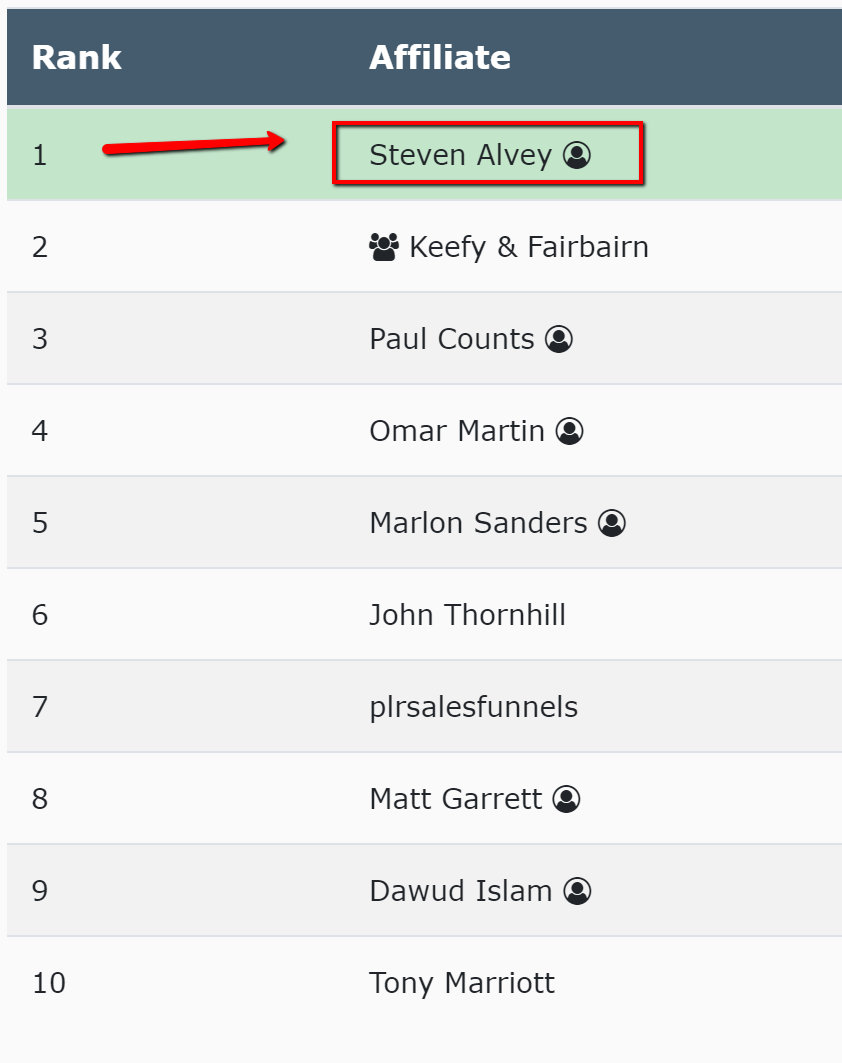 If you're ready to Promote The Most Momentous PLR Launch in History...

From a PLR Producer Praised and recommended by some of the Biggest Legends online...

Get Your Affiliate Link
Message Me on FB

I'm a simple husband, father of six (soon to be seven!), and recently retired-combat veteran living in the mid-west.

In 2016, I left the Air Force and became a full-time internet entrepreneur.

In the years since then, Deo Gratias, we've gone on to build a multi-six-figure online business with thousands of customers, clients, affiliates, and partners all over the world.

We've had the privilege of being praised by some of the top figures in IM as well as publicly endorsed by celebrity investor Kevin Harrington from Shark Tank. Heck, I've even had the pleasure of giving a speech about online entrepreneurship at the United Nations!

We have the best customer community ("Warlord Nation") in the industry and we thank God for each of them every day.

Our mission is to empower struggling entrepreneurs around the globe "to do what most people are not willing to do, so that they can live like most people never will". 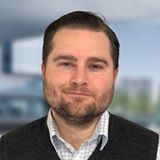 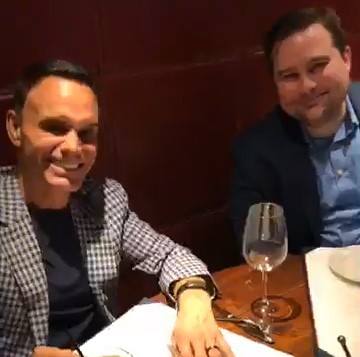 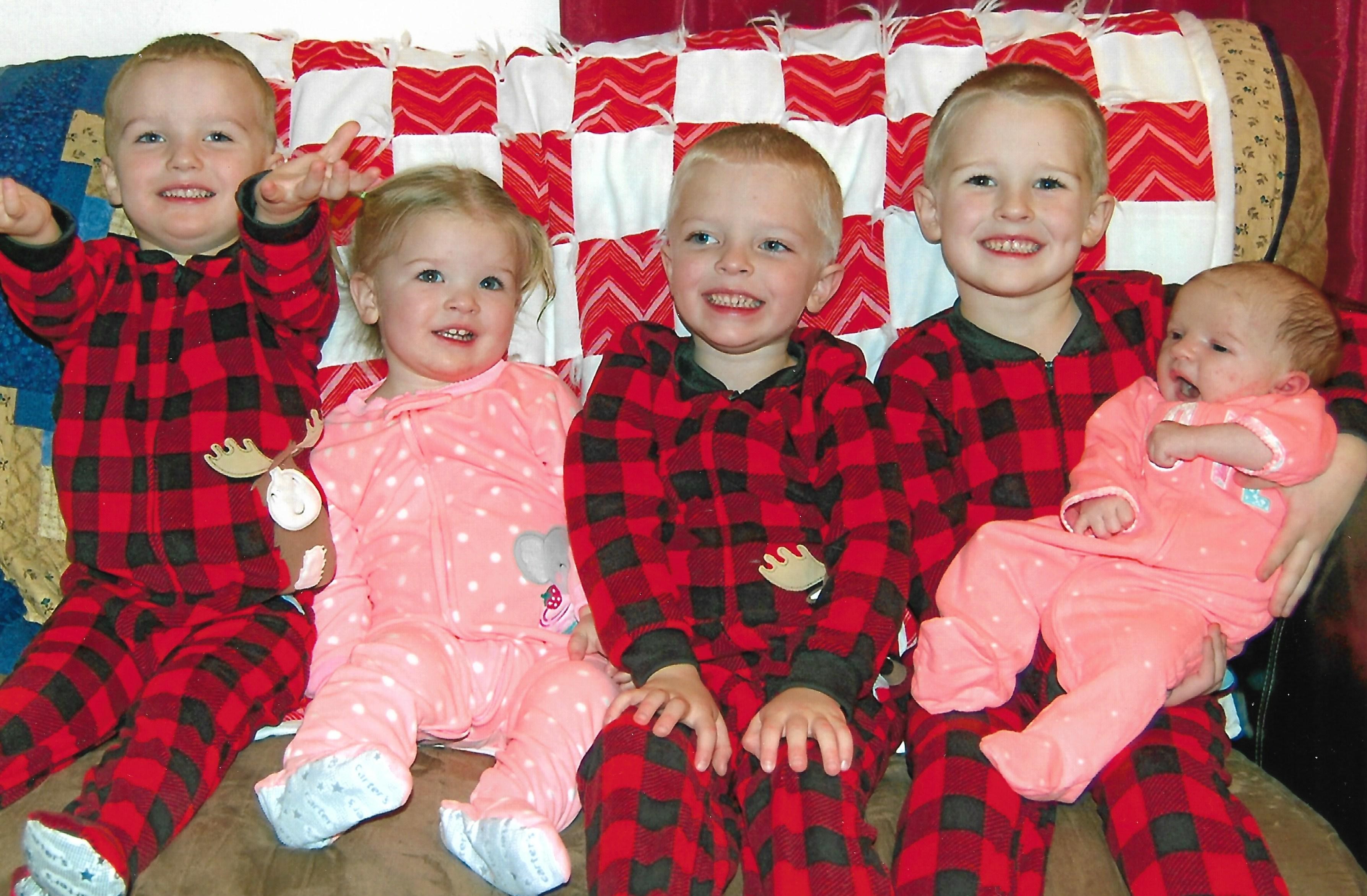 "Steven Alvey is a force to be reckoned with..."

"Steven knows a thing or two about beating the odds..."

"If you have a chance to learn from him about sales and marketing... take it"

"Steven Alvey has created a whole new level of conversion... It's the stuff legends are made of..."

"Steven has a mastery of sales and marketing that few others have achieved. It’s absolutely incredible."

"amazing... how he adds belief, I can't even explain it... a masterpiece in persuasion "

"Steven Alvey is one of the most brilliant marketers I've had the pleasure to work with... Get on his radar..."

Get Your Affiliate Link

"Steven Alvey is a killer marketer who really knows how to sell... his funnels have insanely high conversion rates, and he is one of our Top 1% affiliate marketers."